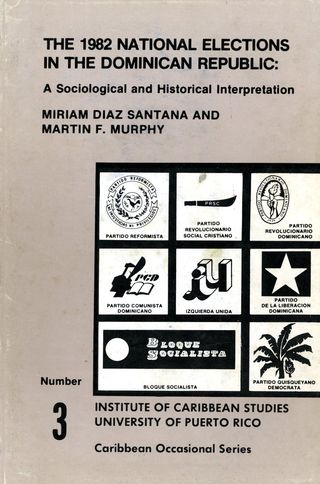 This monographic article was published by the Institute of Caribbean Studies at the University of Puerto Rico in the journal Caribbean Studies in 1983. With 76 pages, it is listed on the cover as Caribbean Occasional Series Number 3.

Written with a sense of urgency at the height of the Cold War, the authors provide a first witness account of the 1982 national elections in the Dominican Republic which brought to power former president Salvador Jorge Blanco (1926-2010) from the Dominican Revolutionary Party (PRD).

The article is divided in three parts: first, the historical antecedents which covers the Trujillo era to the PRD government and opposition; second, some relevant statistical data on the Dominican people in 1982; and three, the elections of 1982 which analyses the role played by the PRD, the Partido Reformista Social Cristiano [Reformist Party], the Dominican Liberation Party (PLD) and the left parties during the elections.

The authors also look at intra- party conflict within the PRD, conflicts with the military, foreign mingling in the elections, and the prospects of Dominican democracy among others.

We thank Gayle Williams, the Latin American & Caribbean Information Services Librarian at Florida International University for maintaining the Latin American and Caribbean Information Center (LACIC) and for donating this and other long out of print monographs to our library. We also thank our friend and colleague City College Reference Librarian Daisy Dominguez for sharing her LACIC’s credits with us.