Clio, Journal of the Dominican Academy of History 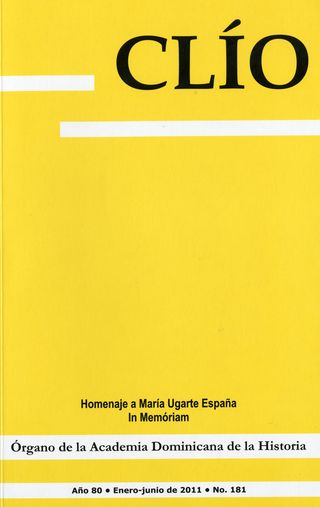 This issue is divided into two parts: the first part is dedicated to María Ugarte (1914-2011), a pioneering Dominican writer and researcher whose career spanned 60 years. The second part covers nineteen and twentieth century Dominican history.

María Ugarte arrived to the Dominican Republic as a political refugee of the Spanish Civil War in the 1940s. Best known for her seminal research on colonial history, Ugarte was a multifaceted writer who worked in the fields of journalism, literature, paleography, anthropology and architecture. Recollections by historians Frank Moya Pons, Jose Chez Checo and Raymundo Manuel González de Peña reflect on her work, legacy and unique personal charm. Further, an essay by literary critic and novelist Jeannette Miller Rivas looks at Ugarte’s literary works. The section ends with four texts authored by Ugarte whose main focus are religious subjects during the colonial era as well as sugar manufacturing during that time.

The rest of the journal carries two condensed historical accounts on more recent history: a brief article on the solidarity efforts by the Haitian government with the Dominican Restoration War (1863-1865) fought against the Spanish Crown; and a much longer piece which looks at the personal and political conflict that developed during the years 1949 to 1961 between Dictator Rafael Leonidas Trujillo and Puerto Rican governor Luis Muñoz Marín, a revered figure among Dominican exiles. The journal ends with two regular sections that cover news from the Academy of History, the latest books, newspaper and magazine articles on Dominican history; a journal index covering the years 1933 to 2010, a member directory and a list of publications by said institution.