Chief Librarian Sarah Aponte would like you to join her in acknowledging some of our most generous book donors: 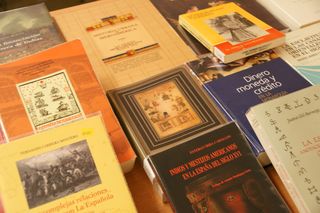 Historian Anthony Stevens-Acevedo, Assistant Director of the CUNY Dominican Studies Institute –as well as one of its founding members—and a Foreign Corresponding Member of the Dominican Academy of History (Dominican Republic), has made some valuable donations of bibliographical material whose thematic scope and relevancy to Dominican, Caribbean and Latin American Studies cannot be underestimated. Working within the discipline of paleography, Stevens-Acevedo’s research focuses on early colonial history in what is today the Dominican Republic. Looking closely at societal structures as well as the political economy of the colonial project including commerce and the colonial sugar industry, this multidisciplinary, yet rigorous scientific approach to history encompasses the whole Caribbean and Latin American region as well as the African and European continents. Stevens-Acevedo’s Master thesis Origins of the Colonial Sugar Oligarchy in La Española: The Case of the Varas-Soderín-Castillo-Torres Clan in the Sixteenth Century is emblematic of his scholarly preoccupations since his days as a young undergraduate student in Seville, Spain. A copy of this publication is available in our library. Moreover, Stevens-Acevedo has written for newspapers and academic journals on Dominican migration to the United States, political representation of Latinos, identity issues among others. In 2009, Anthony Stevens-Acevedo donated around 2,000 volumes from his own personal library. This large donation, which includes books in English, French and Spanish, covers a diverse array of topics such as the early sugar industry, the role of religion in the colonization of the Americas, the judicial and legal framework of the colonial state (el Derecho indiano), the institution of slavery, French, British and Spanish occupations of the of the former Spanish Santo Domingo and Saint Domingue colonies, the Haitian revolution, Abolitionism, European monarchs, medieval European societies, feudalist and capitalist formation, the rise and decline of the Spanish empire among others. A three volume dictionary in Spanish with entries on usage, historical figures and events from the colonial era serve as a companion to this collection. Furthermore, the collection includes studies on both general Caribbean, Dominican and Latin American contemporary history.