Chief Librarian Sarah Aponte would like to acknowledge Angelina Tallaj’s recent donations to our Library. 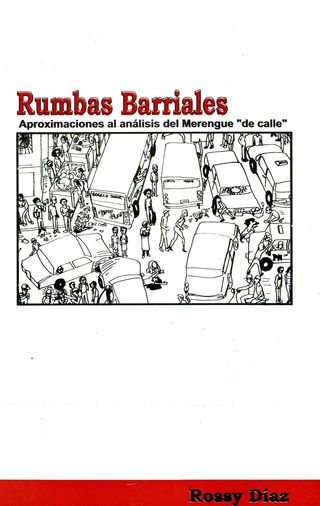 This is a brief but concise monographic study on merengue “de calle” [literal translation: merengue from the streets or urban merengue], an offshoot of Dominican merengue music in the Dominican Republic popularized by a new generation of young artists hailing from the barrios (poor working class neighborhoods). Hip-hop, rap and afro-Caribbean rhythms account for their main influences.  Since the 1990’s, merengue “de calle” musicians have been the target of traditional critics who characterize their music as a lower form of Dominican merengue.

The author is a musicologist who graduated from the Universidad Autónoma de Santo Domingo (Autonomous University of Santo Domingo). She traces the origins of the genre and places it in its rightful historical and social context without any hint of prejudice. Additionally, the author’s deconstruction of the internal dynamics of this music—for example, technical aspects surrounding sound recording such as the role of electronic sequencing and speed— represents one of the most important contribution to the understanding of this controversial musical style. Further, Díaz discusses the cross-pollination of merengue “de calle” with other Caribbean genres like Haitian kompa and Jamaican reggae.

This work is of special interest for musicologists, researchers of Caribbean studies as well as those working on the study of both youth culture and urban life in the Americas. 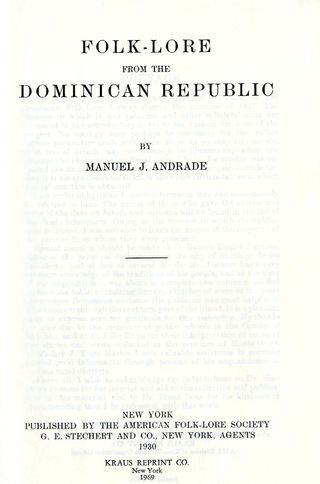 This is a reprint of a book published under the auspices of the American Folklore Society in 1930. The material compiled here by Spanish philologist Manuel José Andrade (1885-1941) during the summer of 1927 resurfaced in the late sixties as volume XXIII of the “Memoirs of the American Folklore Society” series. The book is widely known in the academic field in both the US and the Dominican Republic. In fact, the prologue of the 2009 Spanish edition (published by the Sociedad Dominicana de Bibliófilos) reveals that the first Spanish edition was indeed published in the Dominican Republic in 1948. Subsequently, the year 1976 saw a second printing of the book.

The high data output collected by Andrade allowed him to study the morphology of Dominican Spanish. Some details of how this happened are described in his book. Andrade collected customs and beliefs preserved by oral tradition in the north, east and Haitian-Dominican border regions in the Dominican Republic: Monte Cristi, San Pedro de Macorís, El Seibo, La Vega, Higüey, Bonao, San José de las Matas, Restauración, Villa Velázquez, Dajabón and Puerto Plata.  Informants interviewed for this project were described as being farmers, peasants, workers, “idlers” (in all probability seasonal workers) and “bootblacks” (shoe shiners). What is remarkable is the non-judgmental approach displayed by the researcher coupled with a sense of purpose that gives a voice to ordinary people: women, children and West Indian immigrants.

The folktales collected in this field work are divided into 36 thematic sections each comprised of at least three tales. Additionally, the book ends with a section dedicated to riddles, proverbs and sayings as well as beliefs and customs.