U.S. government declassified documents on the Dominican Republic at DSI

The CUNY Dominican Studies Institute Library would like to thank Dr. Norberto James Rawlings for donating copies of U.S. government declassified documents on the Dominican Republic. While conducting research in the John F. Kennedy Library in Boston, Massachusetts; Dr. James Rawlings, an accomplished poet in his own right, looked through declassified documents and photocopied them. Thanks to his efforts, researchers and the general public can have access to these declassified papers in our library. 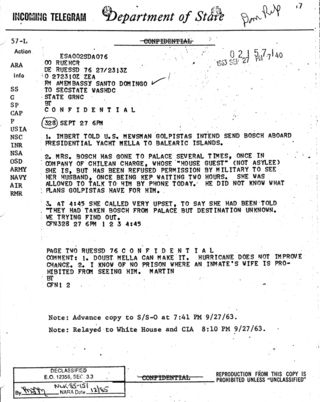 This collection of declassified documents covers three transformative events in US-Dominican relations during the 20th century: first, the last years of the Trujillo dictatorship (1930-1961); second, the post-dictatorial period which includes mass mobilizations in the midst of the Cold War and growing social and political instability in Latin America and the rest of the globe; and third, the short-lived democratic experiment exemplified in the populist government of former President Juan Bosch (1909-2001) from the Dominican Revolutionary Party (PRD), and its subsequent overthrow in a right wing military coup seven months after taking power in 1963. As a direct result, a radicalized wing of the armed forces launched a counter-coup in 1965 opening the gates to a popular revolt with long lasting consequences for the region. This prompted the US government to dispatch a large contingent of marines with the aim of crushing the revolution and in the process, prevent the emergence of “another Cuba” in the hemisphere. Meanwhile, US intelligence agencies aided the military occupation by conducting a close surveillance of the pro-Bosch forces, President Bosch as well as the left organizations that backed the popular revolt.

The declassified documents come from a number of different sources: State Department, Central Intelligence Agency, American Embassy in the Dominican Republic, American Federation of Labor and Congress of Industrial Organizations, Office of Attorney General, The White House, The Secretary of State and The Papers of Arthur M. Schlesinger. They are comprised of memos, diplomatic cables, newspapers and magazine clippings, scholarly articles, and intelligence reports which cover the period from November 30, 1959 to June 23, 1965. The primary source material collected here reflect the ideological framework prevalent at the time: anti-communist hysteria provoked by US military involvement in Vietnam, US government fears of the Soviet Union and China as well as the growing influence of the Cuban revolution.  Another important revelation is the Jim Crow era, racist and reactionary worldview that permeates a number of documents written by US intelligence agents.