Some resources on archaeology at DSI

The island of Hispaniola (shared by both Haiti and the Dominican Republic) is a repository of a rich wealth of information that can shed light on human settlements in the Americas that date back to prehistoric and colonial times. This archaeological record has been the subject of study for a long time. In the 1970s, a group of Dominican archeologists and their international counterparts in American universities and publications produced a considerable body of work that still has not been surpassed to this day. We are glad to present some of that seminal bibliographical material available to the general public at our library. (If you would like to find out more information about the state of the field of archaeology and colonial studies in the Dominican Republic contact CUNY DSI Assistant Director and Historian Anthony Stevens-Acevedo  P: 212-650-7496 E: astevens@ccny.cuny.edu. Contact Prof. Sarah Aponte for further information on library resources T: 212.650.7170   E: aponte@ccny.cuny.edu To find more bibliographical resources on archeology in the Dominican Republic at other CUNY schools we recommend you to search the CUNY+ catalog). 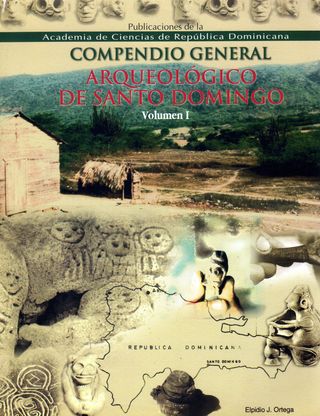 Published under the auspices of the Academy of Sciences, this first volume of A General Guide of Archaeology in Santo Domingo is comprised of nine sections that cover the pre-Columbus period in what later became the Spanish Santo Domingo colony (what is today known as the Dominican Republic).  The study of the first inhabitants of the Dominican Republic coalesced in the 1970s. In fact, that tumultuous decade saw the emergence of new institutions and publications funded by both public and private sectors. Further, there were 300 excavations during that time, according to the introduction. By 1973, the newly built Museo del Hombre Dominicano [Museum of the Dominican Man], had acquired enough pieces to display both the Mesoindian and Paleolithic exhibits. This ambitious guide presents a well-detailed overview of archeology in the Dominican Republic by providing maps, charts and information on archaeological sites; methodology and concepts to study the pre-historical period; and finally, historical sources (in English, Spanish and French) as well as archaeology field surveys and excavations, tracing one of the first archaeological reports to the 19th century written by the British Consul Sir Robert Shomburgh*. The guide has a bibliography.

This general guide is of interest to archaeologists, amateur archaeologists, historians, students and researchers working on human settlements, pre-capitalist societies and socio-political formations in the American hemisphere. Published during the heyday of the Museo del Hombre Dominicano [Museum of the Dominican Man], this research monograph –filed under Investigaciones antropológicas No.13 [Antropological research No. 13]—investigates the indigenous chiefdoms (cacicazgos) that existed before and after the Spanish conquest in the island of Hispaniola shared by what is today Haiti and the Dominican Republic. The research draws upon history, geography, cartography and linguistics in order to demystify the traditional historiography on indigenous chiefdoms in the island. The book comes with a map insert.

This research monograph is of interest to those researching some of the following topics: Pre-Columbian societies, pre-historic cave paintings, Caribbean indigenous people, social and political organization of the Taíno people, the Taíno language, Meillac pottery, the impact of colonization on indigenous people and colonial maps. 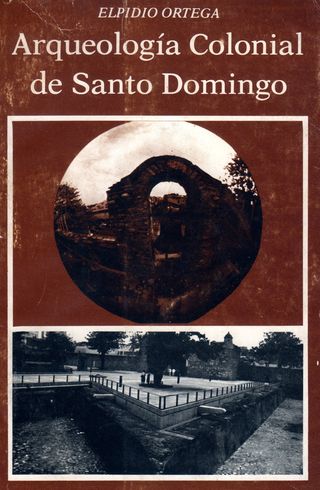 This book is a collection of five archaeological reports on historical monuments from Santo Domingo City and La Vega or Concepción de la Vega municipality (Cibao region) dating back to the colonial period. Additionally, it has a study on ceramics and Spanish colonial coins. The first part of this book looks at the following religious and government sites: the Convent of Saint Francis, the Convent of the Dominicans, the Chapel of the Third Order of the Franciscans, the Square of the Priests and the Colón [Columbus] Park, the House of Diego Caballero, The Mercedes Church, The San Miguel Church, The Chapel of San Andrés, a colonial house (No.85) located in Isabel la Católica Street. Further, there is a section on colonial coins. Ceramic art from the pre-Hispanic period in the Antigua Concepcion de la Vega [The Old City of Concepción de la Vega] in what is today La Vega is the focus of the study of the second report. During the colonial era, Concepción de la Vega became a boomtown due to the proliferation of gold mines. The third report covers excavations at La Casa del Cordón, a stone house built in 1503. Its owner was Francisco de Garay, who was a servant to Christopher Columbus.  (Garay would become Columbus’s notary public as well). The fourth report is on Casa de Gonjon; the Casa de Gonjon was founded as a school in 1558 by Hernando Gonjon, a wealthy sugar mill owner. Over the years, Casa de Gonjon housed a university –called Santiago de la Paz—which flourished for a while until the island was invaded by the pirates hordes led by Francis Drake. The expulsion of the Jesuits in 1767 marked the end of the institution of higher learning. The fifth and last report is on Parque Independencia [Independence Park], San Lázaro Church and Santa Barbara Fort and Church. 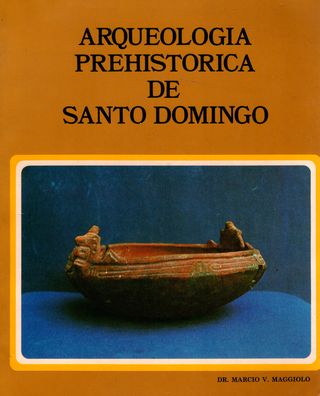 This seminal book is an ambitious attempt to provide a general overview of pre-historic archaeology in the Dominican Republic.  The book is divided into six chapters. Chapter one looks at the state of prehistoric archaeology in the 20th century by surveying some of the most important historical sources available to the author in Spanish, French and English. Chapter two examines the physical geography of both the country under discussion and the rest of the Antilles islands. By doing so, the author sets out to prove his thesis of a shared past among the inhabitants of the island of Hispaniola (present day Dominican Republic and Haiti), the Caribbean islands (Cuba) and South America (Venezuela). The main aspects under discussion in this chapter are geology, climate, orogeny, hydrography, vegetation, flora and fauna, ecology and population. Chapter three examines both pre-ceramic and ceramic cultures. With the aid of ethnology, the author attempts to reconstruct the ciboney culture for the reader. The chapter highlights the main characteristic of ceramic art produced in the island as well as archeological sites. Further, it offers a typological summary of relational databases that comprises Venezuela, Puerto Rico and Santo Domingo. Chapter four discusses pictographs and petroglyphs. The last two chapters focus on the indigenous people.  Chapter five presents a historical and cultural sketch of the island of Hispaniola. This discussion highlights the following: food diet, geophagia ,fishing, hunting, agricultural practices, domestication of animals, food preparation, beverages, drugs and hallucinogens, rituals and sports, division of labor, textile art, taíno art, weaponry, utensils and so on. Chapter six examines the belief system and the society of the indigenous people including customs, games, rituals, musical instruments, marriage arrangements, political and territorial divisions, war, life cycle (infancy, adulthood, death), funerary rites, religious rites (idols and cemies), trigonolitos (three-cornered stones), purification rituals, masks and ceremonial canes and walking sticks. The book includes an appendix, maps, illustrations, photographs, documents produced at the time of the research and a bibliography.