In an effort to disseminate social and political thought from the Dominican Republic and the Caribbean, we are glad to present five distinctive social science publications written by Juan Bosch (1909-2001) and  available at our Dominican Library. These sources were published at different intervals of his life and provide insight into colonial history in the Americas and Europe, eighteenth and nineteenth century Caribbean history and twentieth century contemporary history. During the twentieth century, few writers in the Dominican Republic were as prolific as Juan Bosch. An educator, political organizer and former president, Bosch’s impact on politics, literature and the social sciences cannot be overestimated. The five publications below were a product of heated intellectual and political polemics with other writers while others were written with the explicit aim to educate the general public on important issues of the day by looking at the past with a critical eye.  All publications listed here are in Spanish unless otherwise indicated. (The DSI library has an extensive collection of literary and political works authored by Juan Bosch. In addition, we have a growing collection of literary criticism, political essays and audiovisual material that examine his life, work and legacy. To find more resources on Juan Bosch at DSI Library and other CUNY schools we recommend you to search the CUNY OneSearch catalog). 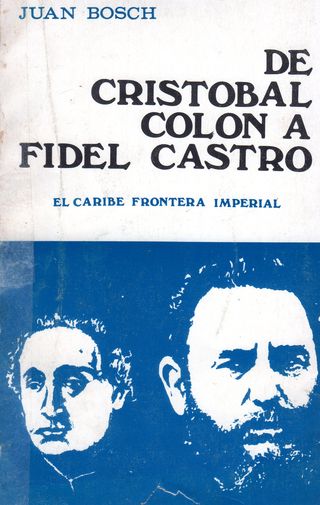 Drawing in part from the work of non-traditional scholarship as well as his own, this 738 page book is one of Juan Bosch’s most ambitious works. De Cristóbal Colón a Fidel Castro depicts the Caribbean region as a dynamic place moving history forward. Like many passionate writers and artists, Bosch does not shy away from contradiction. In Bosch’s writing, which reveals his political thinking at the time, traces of historical materialism co-exist side by side with positivist ideological formulations. Nevertheless, Bosch writes from a critical perspective that examines European colonialism in the Americas and its “imperial frontier” in the Caribbean erected over a period that lasted five centuries. Subsequent wars of independence, however, led to its demise to be later reconstructed by the United States as its expansionist policy took hold over time. Further, Bosch argues that a new historical period unlike any other opened up with the defeat of U.S-trained mercenaries who invaded Cuba in 1961 (Bay of Pigs or Playa Girón invasion) as it marked the demise of the imperial frontier set up by the United States. The book first saw publication in 1970. It has a bibliography and an index. 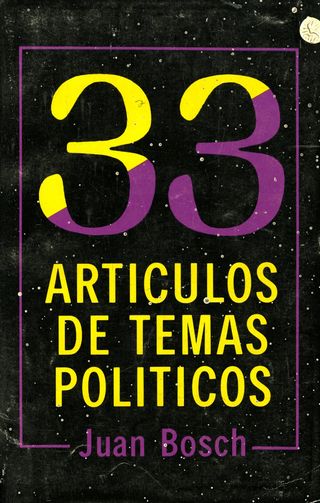 This is a collection of essays first published in the 1980s in Política: Teoría y Acción [Politics, Theory and Action], the long defunct journal of the Dominican Liberation Party (PLD). This book was published at the time when Bosch publicly embraced a Democratic Left/National Liberation political outlook. Bosch writes about the Nicaraguan revolution, the Reagan presidency and the International Monetary Fund (IMF). Furthermore, Bosch’s essays touch upon both historical and ideological issues such as Latin American independence hero Simón Bolívar, the Russian Revolution, labor struggles in the United States, the Trujillo dictatorship in the Dominican Republic, political strategies and tactics as well as the role of the political leader. (We thank the Latin American and Caribbean Information Center (LACIC) for this donation).

This publication is essential reading for those studying Juan Bosch’s political and theoretical thought, populism as well as center-left and national liberation parties in the Americas. 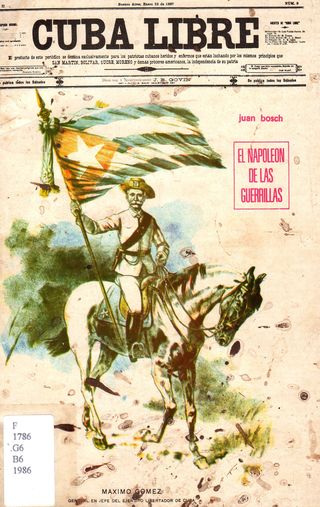 First published in 1976, this book is a brief survey of the military campaigns organized by Dominican General Máximo Gómez (1836-1905) during Cuba’s War of Independence known as the Ten Year War (1868–1878). In this book, Bosch examines General Máximo Gómez’s social and political thought while looking at its impact on the course of the war to liberate Cuba from Spanish rule. The title of the book comes from a piece in The London News that recognized General Máximo Gómez’s tactical insights by comparing him to French military leader Napoleon Bonaparte (1769-1821) hence the name “The Napoleon of the Guerrillas”. As an aside, the book cover provides insight on the solidarity efforts of other Latin American nations with the Cuban people by reproducing the front page of the Buenos Aires-based Cuba Libre newspaper published on January 23rd of 1897.  (We thank Luis Feliz for this donation). 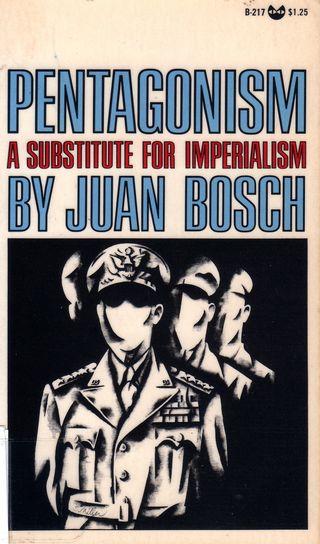 This is perhaps Juan Bosch’s best known political essay. In a nutshell, the author’s elaborates further on the “military-industrial complex” thesis in an attempt to denounce US interventions and coups—particularly his own experience as the first democratically-elected president of the Dominican Republic post-dictatorial period who was overthrown in a military coup in September of 1963. Translated into several languages, the book was the love child of a tumultuous epoch (the Cold War) in which world powers (the US and the former Soviet Union) competed for political, military and economic hegemony around the world. The backdrop to this book and similar publications at the time were the April of 1965 Constitutionalist revolution in the Dominican Republic and U.S military invasion; the anti-colonial wars in Africa; the Chinese revolution; the Laos, Cambodia and Vietnam war conflict (1955-1975); the civil rights movement in the U.S. and finally, the worldwide student revolts that shook the Western world. This publication is available at the DSI library in English. 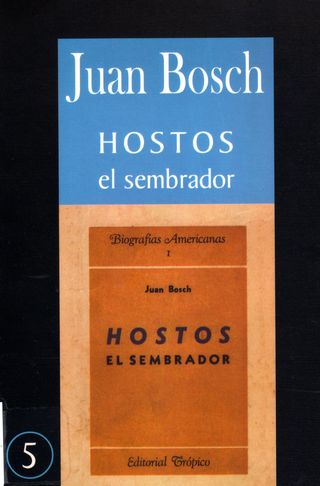 This is a biography of positivist educator and political activist Eugenio María de Hostos (1839-1903). Originally born in Puerto Rico, Hostos left a profound mark on Dominican and Spanish-speaking Caribbean culture and letters.  The first edition of this book appeared in Cuba in 1939. This ninth edition (2003), published under the auspices of Fundación Juan Bosch to commemorate the one-hundred anniversary of Hostos’s death, presents a young Bosch working as a researcher for a living while laying the foundation for the study of Hostos’s extensive body of work and legacy. Consequently, Bosch’s work was fundamental in rescuing Hostos from the dustbin of history.