DSI received two new audiovisual donations: one from DSI intern Jhensen Ortiz and one from Bobbito Garcia respectively. Jhensen Ortiz donated The Galindez File while Bobbito Garcia donated Doin' It in the Park. (Garcia is also one of its directors). Both of these films reflect Ortiz’s interests in history, sports, politics and popular culture. He is currently pursuing a M.A in Library Science at Queens College. For more on Jhensen Ortiz’s work check out “Three Afro-Latino baseball players you ought to know” published last year in the Smithsonian blog. Chief Librarian Sarah Aponte would like to thank Jhensen Ortiz and Bobbito Garcia for making these two important donations to our growing audiovisual collection. 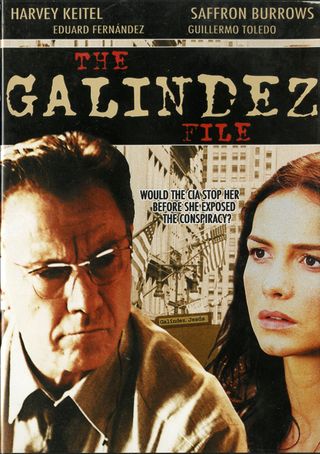 The senseless murder of Spanish Republican and Basque nationalist exile Jesús de Galíndez (1915-1956) at the hands of the Trujillo dictatorship (1930-1961) in New York City is the subject of this film based on the 1991 award-winning novel of the same title—this resource is available at the CUNY/DSI Library for consultation. The novel was written by Manuel Vázquez Montalbán (1939-2003) who was one of Spain’s most important social critics. This aspect shows in the film adaptation, a tour de force full of Cold War intrigue and suspense.The film tells the story of Muriel Colber (Saffron Burrows), a graduate student bent on digging out the truth about the unsolved mystery surrounding the death of Jesús de Galíndez (who taught at Columbia  University ) and the CIA agent (Harvey Keitel ) trying to stop her at all cost. Although the film is based on a fictitious narrative, it manages to connect the dots by tracing the political context that led to Galíndez’s disappearance and subsequent murder as well as the essence of his dubious personality and real political loyalties which still remains a mystery to this day.

This film could be of interest to those studying the history of the Cold War in Latin American and the Caribbean, the Trujillo dictatorship in the Dominican Republic, the Spanish Civil War and the influx of Spanish refugees in the Americas during the civil war as well as issues of academic freedom in American universities.

●To learn more about Jesús de Galíndez feel free to stop by our library during published hours. The CUNY/DSI library has an extensive bibliographical collection on the Spanish Republican refugees in the Dominican Republic, Cold War politics and U.S foreign relations. For more information, contact chief librarian Sarah Aponte. You can also search the CUNY+ online catalog. 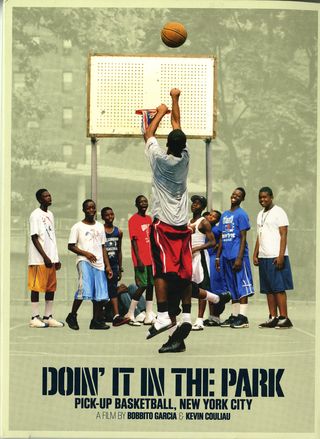 This documentary film is a history of pick-up or street basketball. But it is also a travelogue of sorts that showcases New York City’s basketball courts from Central Harlem to Queens to Brooklyn and Washington Heights. Grammy award-winning musician Eddie Palmieri (b.1936) wrote the original score. The film traces the birth of street basketball and its trajectory in New York City neighborhoods where pick-up basketball eventually became a popular pastime among African-American youth and Latinos. Over time, the game developed its own rules and language. At the end, New York City public basketball courts created a new style that transformed mainstream basketball.

Entertaining and illuminating, basketball fans and anyone interested in contemporary New York City history, cultural movements and urban life will enjoy watching Doin' It in the Park.Overall,this is an important audiovisual resource. The film goes beyond a mere sport narrative by exploring issues that affects African-American and Latino youth. Among some of the topics explored in this film are economic inequality, gender (female basketball players), deaf basketball players, friendships and systems of community support.