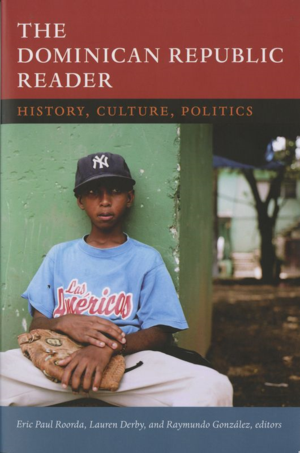 This book is a comprehensive volume about the history, politics, and culture of the Dominican Republic that ranges from precolonial times, the birth of the republic and modern Dominican society up to the early twenty-first century. Among the volume’s 118 selections are essays, speeches, journalism, songs, poems, legal documents, testimonials, and short stories and several interviews conducted especially for this publication. Accompanying each text – many of which have been translated into English for the first time—are introductory paragraphs by the editors. The volume’s eighty-five illustrations, ten of which appear in color, include maps, paintings, and photos of architecture, statues, famous figures and ordinary Dominicans going about their everyday lives.

The book introduces English-speaking readers to some aspects of the Dominican Republic’s rich and complex history, culture and politics. Almost a decade in the making, the three editors carefully created thematic sections and selected content that is resourcefully substantial for both undergraduate and graduate courses. This volume contains translations from contributors like Melissa Madera a reproductive rights activist and the creator of the Abortion Diary podcast who produced one of the few essays on public health policies in the Dominican Republic titled ‘Never Forget Syphilis’: Public Health, Modernity and Gender in the Discourse of Previsión Social during the Trujillato which is available online in PDF format through CUNY DSI website.She contributed an English translation of Los Amos  (The Masters) a social realist short story by Juan Bosch (1909-2001). The story reflects Bosch’s concerns and preoccupations with the rural poor and the exploitation that affects them. The contributions from scholars in the Dominican Republic that are rarely published in English increases the reader’s strength.Translating the work of others is valuable and in chapter four—Caudillos and Empires you will come across the profiles of 19th century caudillos (leaders) Pedro Santana and Ulises Heureaux. The translation of these men biographies are significant to Dominican history and this is one of the many translations you will find in the reader.

This volume is recommended to students, researchers, and historians as well as the general public. The wide array of contributions in this collection are well-written, easy to read, and concise. There is something for everyone in this book, it is worth reading. The CUNY DSI Library has an extensive collection of biographical and bibliographical sources on the Dominican Republic. We recommend you consult them alongside the reader, Santo Domingo: Cultura, Política e Ideología by Franklin Franco Pichardo, El Tíguere Dominicano by Felipe Collado, Quisqueya La Bella: The Dominican Republic in Historical and Cultural Perspective by Alan Cambeira, Las Dictaduras Dominicanas by Juan Bosch, Historia social y económica de la República Dominicana by  Roberto Cassá, The imagined island: history, identity, & utopia in Hispaniola by Pedro San Miguel, Barrios in Arms: Revolution in Santo Domingo by José A. Moreno, Historia gráfica de la Guerra de Abril  by Fidelio Despradel Nation & citizen in the Dominican Republic, 1880-1916 by Teresita Martínez Vergne, Desde la orilla : hacia una nacionalidad sin desalojos edited by Silvio Torres Saillant, Ramona Hernández and Blas R. Jiménez, Voices of the Diaspora: Stories and Testimonies of Dominican Immigrant Women edited byMary Ely Peña-Gratereaux, among others.

Chief Librarian Sarah Aponte would like to thank Alanna Lockward for donating the following books to the CUNY Dominican Studies Institute Library: 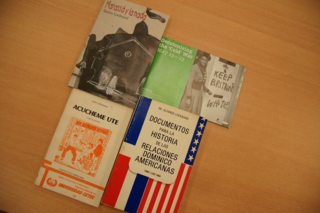 Alanna Lockward visited the CUNY Dominican Studies Institute on May 30, 2014, and the publications donated represent her work as well as her intellectual family. The CUNY DSI library appreciates this generous donation and looks forward to sharing her work with students, researchers, and the general public. Alanna Lockward writes about a variety of intriguing issues, which leads to exhibitions, novels, and performances that are both absorbing and affecting.

Feel free to check out her website to learn more about her novel Marassá y la nada and exhibition Black Europe Body Politics: Decolonizing the ‘Cold` War May 19-23.