Professor Sarah Aponte would like to thank Allison J. Petrozziello for her kind visit and for donating several books from Observation Center for Migration and Development in the Caribbean (OBMICA) to our library. 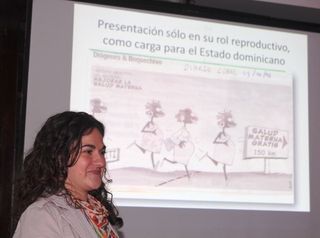 Below we briefly review three of the eleven publications: 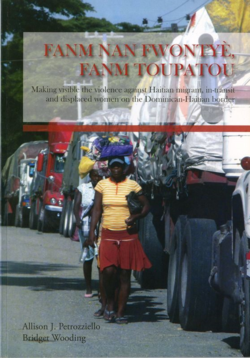 This book is a qualitative study on the reality of Haitian women and girls who experience multiple forms of violence on the Dominican-Haitian border, whether as migrants, cross border traders, or displaced persons following the 2010 Haitian earthquake. Furthermore, the fieldwork for this study was done specifically with the help and support of Haitian migrant woman in the border area of Elías Píña/Belladére who shared their experiences with the research team. In terms of the methodology the authors articulate and analyze the data reading through relevant literature, both theoretical and empirical, prior to the field work, which was done during the second half of May 2011. They also worked closely in collaboration with the Colectiva Mujer y Salud (CMS), a non-governmental organization dedicated to women’s issues. CMS assisted OBMICA in identifying women who were displaced following the Haitian earthquake, as well as additional support to researchers in the field and logistics throughout the study. Lastly, the authors offer a series of recommendations to the Dominican and Haitian governments, local authorities, the civil society, international organizations, and migrant women themselves. 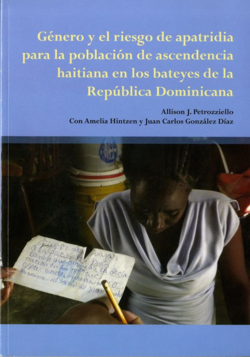 In this book, based on historical and sociological research, the authors argue that there are important gender dimensions to mediate in the risk of becoming stateless (or remain in a state of legal limbo) for Dominicans of Haitian descent in the Dominican Republic. There is a chapter on the historical background on the lives of women in the bateyes from the era of Trujillo and concluding with the time of the State Sugar Council from 1961 to the present; particularly important because they explain why the sudden encouragement from the Dominican state for the formation of Haitian families and their descendants to live in the country and work in the sugar cane fields. The publication is also responding to the Constitutional court ruling issued on September 23, 2013 that retroactively revokes citizenship for thousands living in the country of Haitian. Those born in the Dominican Republic since 1929 could lose citizenship if they don't have at least one Dominican parent. The ruling has caused to upend the lives of thousands, mostly people of Haitian descent. The book provides timely analysis on finding solutions to this humanitarian crisis triggered after the Constitutional Court ruling. Applying a gender context reveals patterns and peculiarities which, in turn, allow human rights defenders to identify strategic points to support their fight against this serious and blatant violation of human rights. 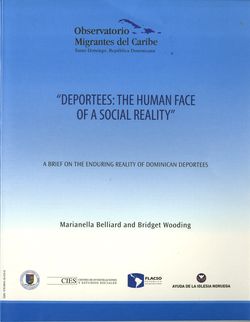 This booklet discusses the social reality of Dominican deportees from the United States to the Dominican Republic. While their analysis is brief there is substantial information on 1996 “Illegal Immigration Reform and Immigrant Responsibility Act (IRCA)” and its impact on deportation. Inside you will find two cases that are emblematic of how this law was applied arbitrarily. There are graphs and statistics depicting the number of non-criminal and criminal deportation. In addition, the authors describe the social perception of deportees in Dominican society and the wasted opportunity that many dream of going to America. Overall, the booklet is comprehensive in examining the reality felt at both ends—in the United States and Dominican Republic.

This book is highly recommended to students, researchers, sociologists, and human rights activists as well as the general public. Their work covers key research areas as: United States and Dominican Republic Immigration Law and policy, International migration law, and society perception of deportees.

To learn more about OBMICA (Observation Center for Migration and Development in the Caribbean) feel free to visit their website.The CUNY/DSI library has an extensive bibliographical collection on human rights abuses, women rights, and discrimination in the Dominican Republic. For more information, contact chief librarian Sarah Aponte. You can also search the CUNY+ online catalog.