Opposing the Dominican Architectural Past and Present

Prof. Sarah Aponte would like to thank Architect Sachi Hoshikawa and PhD candidate Jennifer A. Báez for their recent donation related to Dominican architecture and the 1955 Dominican Republic’s Peace and Confraternity of the Free World Fair during the Trujillo regime.

Báez, Jennifer. “Constructing the Nation at the 1955 Ciudad Trujillo World’s Fair.” Athanor XXXII (2014): 93-101. (Athanor is a magazine published by the museum of fine arts and art history department of Florida State University) 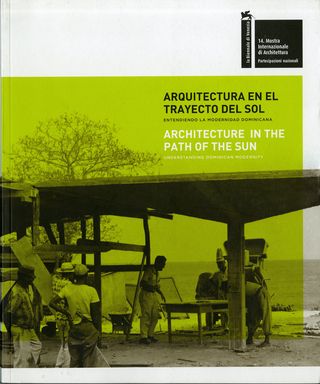 Few published articles and books compile in such a chronological way the ideology, history, and aesthetics of modernity in the Dominican Republic. The book was published as a complimentary piece to the Venice Biennale exhibit in 2014, one of the premier cultural events in the world displaying new art trends. This volume contains a compilation of texts and images to give readers a comprehensive idea of the rise of the particularities of Modern Architecture in the Dominican Republic. It provides a concrete analysis using a “historical synchronic frame” in others words a sense of the evolution of Dominican architecture; while attempting to deconstruct the notion of modernity within specific ideological and political contexts. The periods of Dominican architecture evolution are broken down into the following sections: the beginning of the twentieth century, the Trujillo dictatorship, the governments of Joaquín Balaguer and the recent years. In addition, many students and professionals in architecture will find this book particularly useful for its thoughts and reflections on ethics and aesthetics that are embedded in the new language of design in the Dominican Republic at different political circumstances.

Arquitectura en el trayecto del sol acknowledges the inherent identification of the “Peace and Confraternity of the Free World Fair,” where Dictator Rafael Trujillo celebrated his 25 years of power, as a sort of zenith of the construction of Dominican modernity. The article “Constructing the Nation at the 1955 Ciudad Trujillo World’s Fair.” implicitly talks about this as well, this construction of the nation and the fair as a medium for the dictatorship’s power and presence. The article mentions how the fair shaped the idea of the nation and defining modernity in the structure of hierarchical relationship between the city and the colonial quarters. While Báez’s article focuses on how the conception of a Dominican nation was cultivated during the Free World Fair and simultaneously carving a distinct cultural and spatial geography in relation to Haiti, I believe there are interesting parallels in both the article and the book. The fair was the channel for this discourse on Modernity at a very critical time in the Dominican Republic because of the anti-communist rhetoric in the Western hemisphere. The Trujillo regime needed to promote modernity and progress, in its own terms, but also attempted to align State ideology with Cold War discourse.

Furthermore, the article discusses the role of la zona colonia (colonial quarters) as a model of our architectural heritage, but it also gave spectators a contrast of past and present. I recommend this article if you want to understand how the fair forged this perception of the Dominican nation within the international panorama, but also in its relationship to Haiti. The book will give you more information and contributes critically to the discussion on the fair in the chapter “Modernity and Power” by Gustavo Luis Moré.

On another note, if you happen to be in New York, do not miss Latin America in Construction: Architecture 1955-1980, an exhibition at the Museum of Modern Art. Commemorating and celebrating the 60th anniversary of “Latin American Architecture since 1945,” a landmark survey of modern architecture in Latin America. Now the Museum returns to the region to offer a complex overview of the positions, debates, and architectural creativity from Mexico and Cuba to the Southern Cone between 1955 and the early 1980s. The show is on view until July 19, 2015.

Sachi Hoshikawa, an architect and real estate advisor who holds a Master in Design Studies in Real Estate Finance and Development from Harvard University, is the collaborator and executive producer of Laboratorio de Arquitectura Dominicana (LAD) a non-profit organization based in the Dominican Republic and New York City.

I highly recommend that architectural students specifically take advantage of the above discussed resources and the exhibit. The resources also serve those that may be studying history, political science, and art history. There are many photographs of the beautiful architecture over the years in the Dominican Republic so for those doing photography don’t be shy, come and visit the library.