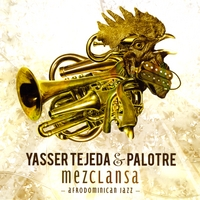 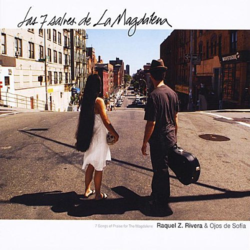 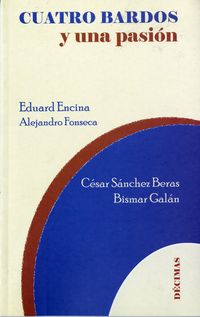 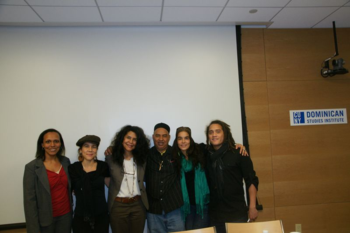 IDENTITY and MAGIC at CUNY DSI

Prof. Sarah Aponte would like to thank VICINI for donating this magnificent publication. Images from the book Identity and Magic: Folk Dances of the Dominican Republic will be on view from May 17 to August 17. The opening reception will feature the well-known Dominican folklorist Dagoberto Tejeda Ortiz and will be held on Friday May, 17th from 6:30pm to 8:30pm. Admission to the reception is free and open to the public: please register at http://identity-and-magic.eventbrite.com 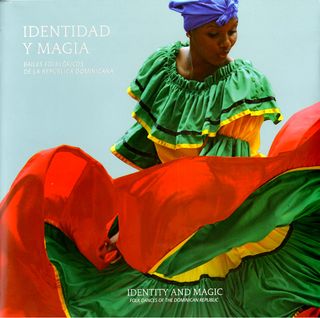 This beautiful coffee table book recounts the history and evolution of folkloric dances in the Dominican Republic. The book was written by Dagoberto Tejeda Ortiz, a well-known researcher who has dedicated many pages to investigating the subject.  (Many of his books are available at DSI for perusal). It narrates the story of the Dominican Republic’s folk dances through multimedia: writing, photography, illustration and a documentary video. This combination provides a great, interdisciplinary overview of dances and themes examined in each chapter.

Identity and Magic Folk Dances of the Dominican Republic is an important resource for researchers, students, dancers, musicologists, ethnographers, musicians and the general public interested in Dominican folkloric traditions, dances, and history.  It is a comprehensive text that seeks to spread, share and promote the essence of folk dances and culture in the Dominican Republic.

The ninth annual International Dominican Women Writers’ Book Fair in the United States which took place during the month of March (23rd –25th), was dedicated to four women for their pioneering contributions to the dissemination of Dominican literature, culture and history in the Unites States and beyond. The Dominican Library at the City University of New York Dominican Studies Institute is proud to announce that Chief Librarian Sarah Aponte was among those who received various awards during the opening ceremony held at La Isabella nursing home auditorium in Washington Heights, which is home to a large and vibrant Dominican community. Among the honorees were poet and cultural activist Osiris Mosquea, educator and administrator Ana Isabel García, and renowned researcher Mary Ely Gratereaux.  Every year, since 2003, the International Dominican Women Writers’ Book Fair highlights the literary and intellectual production of Dominican and Latino women in the United States. This year’s book fair, which joins International Women’s Day celebrations throughout the US, had as its motto “Leyendo Escribimos Nuestras Vidas” [By reading we tell our lives].

In a well-organized event full of surprises, the book fair recognized the pioneering work of Chief Librarian and Assistant Professor Sarah Aponte among others. The book fair, which is rapidly becoming the premier literary gathering of Dominican women poets and writers in the US, was sponsored by Dominican Women’s Development Center, Comisionado Dominicano de Cultura, City University of New York, Cayena Publications, Hostos Community College, and Fundación Global Democracia y Desarrollo (FUNGLODE). Approximately 300 people attended the opening ceremony which included special guests from Venezuela, Haiti, Romania and the United States. The event was accompanied by an imaginative, and rather poignant, poetry slam recital by Sussy Santana; and two lively musical performances by Smithsonian folklore and popular music researcher and musician Irka Mateo, as well as singer Cynthia Cruz who wooed the audience with her love songs and grace.

This cultural gathering organized by poet and educator Karina Rieke produced 20 panels and workshops beginning Saturday morning through Sunday evening. This year’s book fair paid homage to Dominican female poets including the honored poet Mosquea and researcher and film producer Gratereaux, City College alumnus Kianny Antigua and Yrene Santos. Furthermore, several male poets and literary critics were invited to participate in the event. During the closing moments of the three-day affair, Rosita Romero, Executive Director of the Dominican Women’s Development Center, acknowledged the large participation of men – both as panelists and audience members – thus proving that not only women, but men too support this important endeavor. According to Romero: “I believe that it is a wonderful thing that on a Saturday morning, when most women are at home washing clothes and doing other household chores, we all decided to unite and read poetry.” She continued, “The idea of having many people congregate in one place to see the fruit of the labor produced by many prolific women is a great feeling…we should be proud of these women who inspire us.”

Renowned pedagogues from different parts of the United States, the Dominican Republic, and other countries participated in the fair. Syracuse Professor Silvio Torres-Saillant, founding director of the Dominican Studies Institute and long-time professor at the City University of New York, presented his exclusive panel, “Notes on the Female Literature in the United States.” New books such as Lourdes Batista’s En la soledad de mi cama – Solitud in My Bed, which will be launched in English on Saturday, March 31 at Columbia University – were presented at the fair. Also, Mary Ely-Gratereaux’s documentary El rostro detrás de las muñecas [The Face behind the Dolls] was premiered and became an instant hit with audience members. This particular documentary recounts the story of Dominican migrant women who have between ten and thirty years working at the Madame Alexander Doll Company crafting dolls as artists, seamstresses, and stylists, among other things.

In recent years, the field of Dominican studies in the United States has experienced some significant growth. It is important to keep in mind, however, that more than a decade ago, scholars and students in the US interested in the field faced many difficulties at a time when first rate scholarly work was available in English. Nevertheless, a clear and concise conceptualization of this area of study has come into fruition over the years. In 1994, Professor Aponte founded the Dominican Library with donations of bibliographical materials from the Council of Dominican Educators and other community members. The Dominican Library has come a long way ever since. The fact that ample bibliographical material has been catalogued and made available to the public since 1994 indicates the central role librarians play in disseminating knowledge and serving the community. In that regard, Professor Aponte’s unique work, insight and vision have been instrumental in spearheading this effort alongside others such as Dr. Ramona Hernández and Dr. Silvio Torres- Saillant. During her research visits to major archives and libraries in the US and abroad, Professor Aponte managed to uncover important bibliographical contributions that, in one way or another, are paving the way for other researchers and scholars to further advance the study of the Dominican community in the US.

Professor Aponte’s effort in disseminating knowledge about Dominicans in the US is an ongoing project: on a number of occasions, she has given lectures on librarianship while sharing her own experience as the first and only librarian specializing in the study of Dominicans in the US. She also conducts workshops at the Dominican Library attended by early childhood and secondary education public school students and teachers, and collaborates with published authors and writes articles for academic journals. Her most recent publication is “Dominican Related Dissertations in the U.S.: an Analytical Approach (1939-2009),” published in Camino Real (2011), the journal of the Instituto Franklin of the University of Alcalá, Spain. A resident of New York State since 1989, Professor Aponte is known to researchers, authors, students and staff for her kind hospitality and keen eye for detail and academic professionalism. This is one of the reasons why her doors are always open to researchers and students who attend CUNY and other universities located in the tri-state area as well as throughout the United States and other countries. Last Friday, her contribution to the preservation and dissemination of Dominican literature and social history alongside her commitment to academic objectivity received much praise when she received six awards including one from the book fair committee, three New York City Citations from Senator Adriano Espaillat, Assemblyman Nelson Castro and Assemblyman Guillermo Linares, and a New York City Proclamation from Council Member Ydanis Rodríguez which reads in part as follows:

Whereas: In celebration of Women’s History Month, Ydanis Rodriguez Council Member of the 10th District, is proud to honor Sarah Aponte, the Assistant Professor and Chief Librarian at CUNY Dominican Studies Institute Library, for the outstanding achievements; and  […]

Be it Known: That Ydanis Rodriguez, Council Member of the 10th District, gracefully honors Sarah Aponte for her inspirational work and contribution to Dominican Studies. 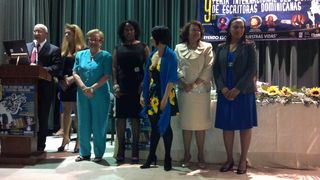 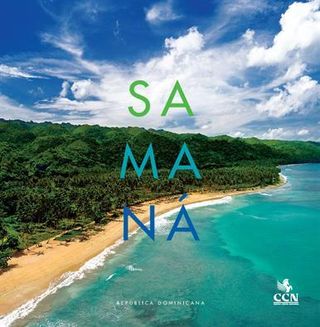 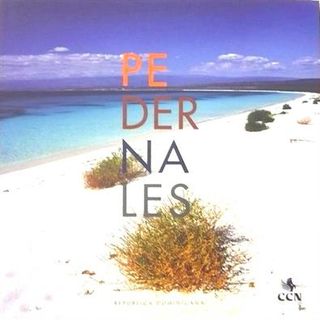 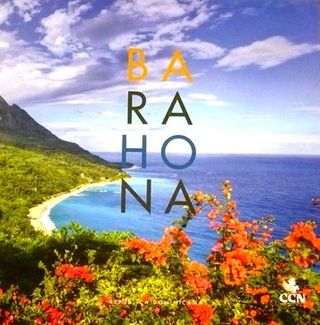 Please join us on Wednesday, September 22, 2010, 6:00 p.m. – 8:00 p.m. to celebrate the donation by Centro Cuesta Nacional (CCN) of the entire set of books and videos of Orgullo de mi Tierra, an ambitious CCN project launched in 2009 to document each year a province or region of the Dominican Republic through documentaries, books, photography, murals, and other educational materials. The series began with the province of Samaná, and this year continues with Barahona and Pedernales. (CCN is the Dominican Republic's largest and most diversified retailer, parent company of Libreria Cuesta, the country’s largest bookstore, among other brands.)

We are deeply grateful to CCN for this wonderful addition to our Dominican Library’s collection, and for hosting the reception on September 22 to which they invite all of you our friends and supporters (their invitation below). If you plan to attend, please let us know. You can register by clicking here, or by phone to 212.650.7170. 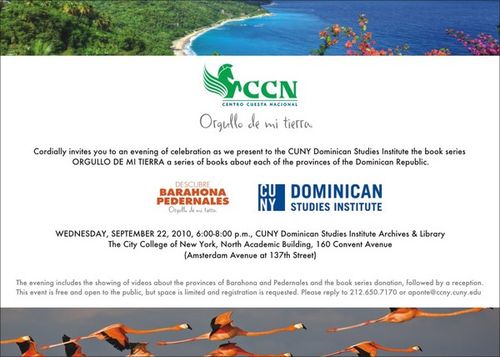